The olive oil seasons the food, stands on the table for a thread of it to lightly coat a salad or fish dish, to dip the bread and to feel that the food that it is being eaten is certainly Portuguese. This tradition is millennial and was brought by the Romans, but it was the Arabs who stimulated its production in Alentejo and Estremadura. Today there are six protected designations of origin (PDO) and at least six different ways of making olive oil in Portugal. The annual production is about 70 thousand tons.

The aroma, the golden or green hue and the acidity, all of them depend on the olive varieties that are gathered in the oil presses from Trás-os-Montes to Alentejo. All over those tracts of land the landscape features almost exclusively the olive groves, which grow both in fertile land and arid soil. The olive tree survives to adversities, it prospers when the conditions are favourable and only begins to produce after it has grown up to the fifth year.

For each olive oil litre are needed five kilos of olives and each olive tree produces 20 kilos per year. The olives’ varieties that are gathered in the oil presses are the Galega, Carrasquenha, Cordovil, Cobrançosa and Verdeal. The latter is essential to the olive oil produced in Trás-os-Montes and Moura while in Beira Interior the Carrasquenha is the most important variety.

From all of the PDO in Portugal, the region of Moura and Barrancos near the frontier with Spain, in Alentejo, is the oldest and it was said that there was made olive oil during the Roman times and everyone who comes to see this place may visit the oil press of Varas do Fojo, an oil press of manual production adapted into a museum. In the North, the region of Trás-os-Montes established the olive oil route, which comprises 15 municipalities and, besides the olive oil, includes wine, almond trees and a visit to the historical cave paintings in Foz Côa. The Beira Interior is a region of good quality olive oil, but also of good wine, cheese, and there can be found some medieval villages and even the Serra da Estrela that is extremely important to this region. 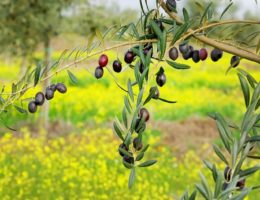