The Queluz Palace, near Lisbon, is today the place where the invited heads of state stay when officially visiting Portugal. The palace was the residence of the royal family between the end of the 18th century and beginning of the 19th century. At first it was used as an intimate retreat for the queen Dona Maria I whose madness was aggravated after the death of her husband, Dom Pedro, and of her elder son Dom José, the heir to the throne. Until the first French invasion and the escape to Brazil the Palace of Queluz, whose construction started in 1747, was the residence of Dom João IV, at the time regent and later king.

In the top of the Sintra mountain sits the Pena National Palace, the favourite residence of the last queen of Portugal. Dona Amélia adored the palace, whose construction was ordered in 1838 by Dom Fernando II, consort king and widower of Dona Maria II. It was in this palace where Dona Amélia took refuge in after the regicide that resulted in the death of her husband and elder son in 1908 and it was also from there that the advances of the republican revolution have started before she exiled herself with her son, the king Dom Manuel II.

This building combines styles appealing to the romantics who fascinated over the exoticism. Dom Fernando II lived in the palace with his second wife, Elise Hensler and made her heir to this property by the time of his death. The widow eventually sold the palace to the State and kept solely the Chalet of the Countess. This palace is considered the first romantic style building in Europe. It was built 30 years before the remarkable Castle of Neuschwanstein in Bavaria. 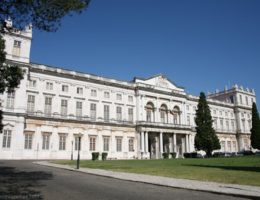