Nine islands, nine different experiences. The Azores, the Portuguese archipelago located in the middle of the Atlantic, have a unique landscape and a rich culture. The blue of the sea, the green of the fields, the lakes, the cities and the villages leave the tourist with the feeling of being in one of Earth’s last paradises.
São Miguel is the largest and most populous of all the islands and it is also where the capital, Ponta Delgada, is located. Its landscape is a composition of agricultural fields, pastures and natural areas. Cattle husbandry and milk and cheese production are essential to the economy of this island, famous for its lakes, especially the lake of Sete Cidades, whose waters have different colours. This twin-lake has a blue side and a green side. In Furnas, still in São Miguel, is where one can be served a “cozido à portuguesa” (traditional stew of various meats and vegetables), cooked in the heat of the earth. This luxurious landscape meets the faith of the people when the cult of Senhor Santo Cristo arrives in the fifth Sunday after Easter.

Without the same natural richness of the other islands, Terceira has, nonetheless, an immense joy. The main city, Angra do Heroísmo, is recognised by UNESCO as a World Heritage site. As far as celebrations are concerned, there is Christmas and the Epiphany, and when it is time for Carnival, the entire island takes part in “Danças do Entrudo”, a popular theatre festival. Some time after comes Easter and the Divino Espírito Santo celebrations, the Sanjoaninas celebrations and the “touradas à corda”, which consist of a bullfight in the street with the bull wearing a long rope around its neck.

It is in the Central Group that the dimension of the archipelago may be truly perceived, especially for the ones who take a seat in Peter’s Café, in the Horta marina, in Faial, and look ahead to find the Pico standing at 2351 meters high. The people of the islands descend from whale hunters, fishermen and farmers. In Pico the farmers planted grapevines in the basalt and the wine there produced was served in the Tsar’s court. The prohibition of whale hunting changed the economy and, in both sides of the channel, the boats leave filled with tourists to see the whales and dolphins. Horta, in Faial, has its life coming from the marina, where the yachts and the sailboats that cross the Atlantic dock.
And there is more to see. Flores offer a breathtaking landscape, in Santa Maria can be found a yellow sand beach, Corvo has little more than 300 inhabitants, São Jorge is known for its “fajãs” (little plains by the rocks which can be cultivated) and in Graciosa windmills can be seen in the historic village of Vila da Praia. 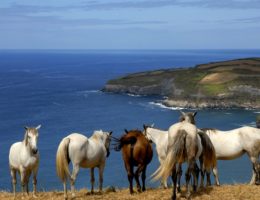 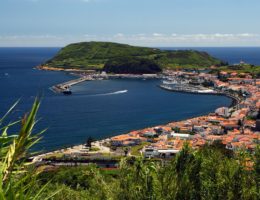 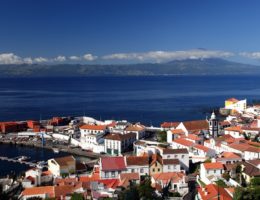 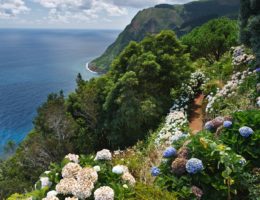 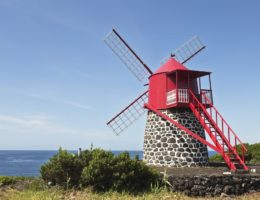 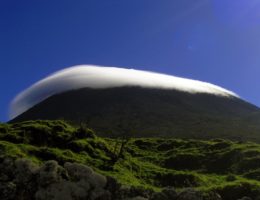 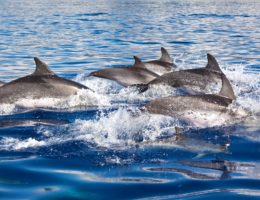